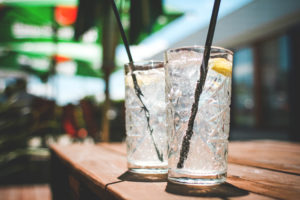 If you’re looking for a good quality blender to use in your own kitchen, you’ve probably come across the Bullet blender at some point! This blender, that has the shape of a bullet is a good alternative to many other bulky expensive blenders.

Find out what the bullet blender has to offer you in this review!

Continue reading – If you want to know the answers to the following questions:

What is the Bullet blender?

The Bullet blenders are special blenders that can be used in any professional or home kitchen. Their main strength is that they’re small. In fact, that is one of the reasons why it was developed.

You see, there are so many other big bulky expensive blenders around, that use up a lot of space in the kitchen. Now, if you’re anything like me, then place in your kitchen is probably very valuable. And you don’t want big appliances to hog up this precious space.

That’s why it’s often a tough dilemma. Do you put the blender in your kitchen? Or leave it in the cabinet and use it only for special recipes? Or when it’s a hot day to make some ice-cold smoothies?

Well, if you experience this issue, then the Bullet blender is for you. You can read more about its size later on in this review. But for now we’re going to answer some other important questions about this special little blender!

This is an easy question. As you might have seen in the picture in the introduction: the Bullet blender looks like a bullet! It’s this special shape that allows it to work as well as any other blender BUT without taking up as much space.

And on top of that, its sleek design will be an addition to the style of your kitchen. Its aluminium color and its bullet shape will get you many compliments!

Top choice of many professional kitchens

But not everyone cares about the looks of the blender. Many professional kitchens in restaurants and hotels want their blender to be functional. They want them to be as effective as they can be. And of course, also in their kitchens the space is limited.

because of this, the Bullet blender is a top choice in many restaurants over the world that value functionality and effectiveness!

But there are more reasons why they pick this blender. Find out all the other benefits this machine has to offer you…

Benefits of the Bullet blender:

Here are the sizes if this little blender:

As you can see, it’s a lot smaller than most regular blenders. This is a great thing, since it basically fits anywhere in your kitchen. And also, it’s not heavy. So if you’re not planning on using it for some time. you can just put it in some cupboard with great ease. It weighs only 4.7 pounds! That’s 2.2 kilos for you non U.S. readers out there!

On top of its advantageous size and weight, it boasts a ton of different functions for such as small kitchen appliance. Here’s a total list of everything you can do with this little blender:

That’s more than a lot of bigger blenders can do!

The Bullet blender is also dishwasher friendly! This means that you don’t have to worry about cleaning the blender. If you’re anything like me, you love to make all kinds of tasty smoothies… but if there’s something you absolutely dislike… then that’s cleaning the blender.

For some reason this always seems to take up more time than preparing the ingredients, putting them in the blender and drinking you smoothie!

But, no longer. You can simply put this blender in the dishwasher to thoroughly clean it. And because of its size, you can also quickly clean it by hand. It won’t take you more than a minute!

For who is the Bullet blender?

Like we discussed before. The Bullet blender is a great option for those who like to blend, but who don’t have a lot of space in the kitchen,

And maybe you just don’t like to blend everyday. Or a big bulky blender doesn’t appeal to you.

Whatever your reasons are for getting a Bullet blender – I’m convinced you’ll absolutely love its size and functionality!

Where can you get a good deal on the Bullet blender?

Another huge benefit of the Bullet blender compared to other blenders is that it’s one of the cheaper blenders out there! Yes, you’ve read that correctly. You’ll not only get a blender that is as functional as a larger one… but also for a fraction of the price!

And to make it even easier for you – I’ve done my research and searched around the net for good deals on this blender. And I found that you can get one of the best deals through Amazon.

So, if you’re looking to buy the Bullet blender for a good price – Click here to buy it on Amazon!

P.S. Oh, and did you know that if you buy the Bullet blender – you’ll get an included recipe book with countless recipes that you can make in less than 10 seconds!